Vulnerability is not the weakest link in leadership

Development activist Dr R Balasubramaniam says vulnerability is a much misunderstood and undervalued quality in a leader. As the world and the workplace become more complex, it is time for leaders to embrace their own vulnerability and access the power of a different kind of leadership.

Some 30-odd years ago, as a young doctor setting out to change the world, I was thinking of building a hospital for the tribal communities near Mysuru.  I was all of 22 years old and believed a hospital was indeed the solution to address the healthcare needs of the community.

So, when a kind person offered a piece of land as a donation to build the hospital, I quickly accepted, despite a close doctor-friend, who was familiar with rural realities, cautioning me that the proposed location was relatively inaccessible and therefore unsuitable for a hospital. But I went ahead and built that hospital in the same location.

In hindsight, it was not the best decision. The better option would have been to set up mobile clinics that could serve many more people than the hospital ever could. Our impact would have been much greater, had I listened to my friend back then. But I had refused to allow myself to be vulnerable.

Embracing vulnerability as a leadership asset

Having spent the last three decades in the development sector and also teaching and exploring the leadership question, I have no doubt in my mind that the complexities of our world today are so vast and the challenges so humongous that no one person can have all the solutions for everything.  However, the common understanding of leadership places the burden of finding a solution on one person – the ‘leader’.

This fundamental flaw in understanding leadership leads to vulnerability being perceived as a weakness; a good leader is expected to be in total control always and have answers to all questions brought to them. Working with this limited and unforgiving understanding of leadership, leaders tend to start believing that they will not be seen as influential enough if they demonstrate vulnerability.

It takes a person of humility and simplicity to admit to not having the solution. In other words, it requires a person to be vulnerable. To be vulnerable is to accept that one does not need to be a leader—one needs to ‘exercise’ leadership. One needs to accept that one may not have the answers that the context demands, but that the answers can be sought from others around you. That act of reaching out and asking for help can be liberating, enriching and empowering.
[Also read: The five traits of good leaders]

If Arjuna, greatly admired for his archery and power, had not demonstrated vulnerability and asked himself fundamental questions about his Self and his purpose, there would have been no Bhagavad Gita. By demonstrating vulnerability and admitting that he was troubled and didn’t have the answers needed at that point in time, he opened up an opportunity for conversations to emerge. And the world benefited by this show of vulnerability.

Vulnerability makes you a better leader

Accepting and embracing your vulnerability makes you a more complete, humane and effective leader by enabling you to access some valuable aspects of true leadership.

As the world and the workplace change at an unprecedented pace, organisations and leaders will do well to rethink their leadership styles. With uncertainty, inconsistency and unpredictability defining the context within which you function as a leader, building coalitions with the people around you is the only sustainable way forward. And being vulnerable will help you build and inspire stronger teams and demonstrate authentic leadership. 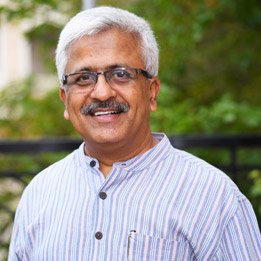 Dr R Balasubramaniam is Founder of the Swami Vivekananda Youth Movement and Grassroots Research And Advocacy Movement (GRAAM). He has lived and worked for several years among remote forest-based tribal communities in the southern Indian district of Mysuru. He is a visiting professor at Cornell University, USA, and IIT-Delhi. He has also served as the Professor and head of the Vivekananda Chair at the University of Mysore twice. He writes regularly on leadership and development; his books, ‘i, the citizen’ and ‘Voices from the Grassroots’ present an alternate approach to human development.