Off the treadmill, onto a steep learning curve

Ashish Dhawan, Founder and Chairman of Central Square Foundation, writes that the most fulfilling years of his life have been those that he spent outside the corporate sector, attempting to address the problems that really matter.

For most of my life, I grew up never really thinking about the “other.” I lived in a bubble and never gave much importance to inequity in society.  I came face to face with poverty on the streets of Kolkata every day. Eventually, I became inured to it.

But somewhere in the background, other forces were at work. My father regularly stopped at the top on our cul-de-sac to provide supplies to the destitute. When I would go to Delhi for the holidays, my grandfather would talk about how he set up the Lahore Montessori Schools and eventually the La Montessori schools for low-income students in Delhi.

I never paid attention to the background noise. That is, until I went to college abroad. At Yale, my perspective changed. There were conversations about race, gender and education inequity. The world’s best and brightest didn’t just want to make money—they wanted to change society. My thoughts and beliefs had been stirred, but I still went to work on Wall Street. I was a money-minded investor, with a social conscience.

Getting off the treadmill

After two jobs in high finance in the US, I enrolled at Harvard Business School, the mecca of capitalism.  I graduated believing that ‘business is a force for good’. That economic development can lift more people out of poverty than charity—just look at China! That making money was okay so long as it didn’t get to your head and was an instrument to affect change. Carnegie Mellon didn’t mince words in Gospel of Truth: ‘Those who die rich, die disgraced’

In the business world, many corporate titans believe that you can’t plan for anything more than the next 3-5 years of your life. I agree to disagree. Whilst that may be true given how much is out of our control, I firmly believe that one must have a longer term, ‘if-all-goes-well’ plan. I decided that I would acquire wealth till my mid-40s and calibrate my expenses so that I could get off the treadmill. Eventually, I did just that.
I was back in India at the age of 30 to start ChrysCapital, one of India’s first home-grown private equity funds. Investing consumed my life, but I carved out 2 percent of my earnings to give away to social causes. I believed that tax rates for the rich were too low and so these donations were easily justified.

From charity to problem solving

Instead of just writing small cheques, I started to engage with social issues: visits to a government school, a community library or a South Delhi slum. Initially, the emotional tug was my propeller, but I really got sucked in when I immersed myself in reading about the systemic issues in development. I was no longer interested in charity, but in solving big complex problems such as school education.

Seven years ago, I left the corporate world to focus on philanthropic work.  I spent most of the early years in building Ashoka University and Central Square Foundation (to work on school education reform).  More recently, I have helped start new initiatives such as Indian School for Development Management, India Leaders for Social Sector (to build leadership for the social sector) and FED (agricultural reform and policy implementation).  I am now interested in several new areas, such as state performance management, air pollution and China-India people-to-people engagement.

Lessons from the transition

Along the journey from the corporate world to the social impact space, I’ve learnt a few lessons:

I am often told that I am unique as no one really leaves the corporate sector in their early 40s. I must admit that I did get lucky and acquire more wealth than I ever imagined. But, regardless, I can assure you that I would have made the switch even if I had not hit the financial jackpot. Today, there are several corporate professionals looking for meaning and purpose in their work, and programs such as the ILSS Leadership Program can enable them to transition into the development sphere.

I turned 50 this year. My most fulfilling years have been those outside the corporate world—getting back on to a steep learning curve, meeting selfless and passionate changemakers and working on problems that matter. Thanks to Uncle Ben (Benjamin Franklin), I realised early on that “Money has never made man happy, nor will it, there is nothing in its nature to produce happiness. The more of it one has the more one wants.” 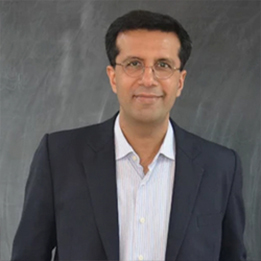 Ashish Dhawan is Founder and Chairman of Central Square Foundation (CSF). He is a founding member of Ashoka University, India Leaders for Social Sector and Indian School of Development Management. Prior to this, he worked for 20 years in the investment management business and ran one of India's leading private equity funds, ChrysCapital. In June 2012, he left his full-time role at ChrysCapital to start CSF to pursue evidence driven and innovation led system reform in school education.