Are we missing the big picture in development?

Prof Ashok Sircar argues that in our pursuit of development, we have failed to confront the real factors that create and sustain social injustice and inequity.

Around four decades since the advent of organised and systematic development actions by state and non-state organisations, there is no denying that some progress has indeed been made in improving human conditions.  For example, hunger and poverty have come down, famines no longer occur, life expectancy has substantially increased, large scale epidemics of cholera, small pox, plague are things of the past.

However, can we say that we have made adequate progress on all fronts? Most of us will perhaps agree that we have not. Therefore, a good question to ask is whether we are missing the big picture in our pursuit of social development. I believe we indeed are—and there are five areas where we are failing to see the big picture.

The void in local governance

One crucial way to make this happen is to create and nurture institutions and processes that are local, democratic, more accessible and accountable, and then task them with most of the development functions. The 73rd and 74th amendments to the Indian Constitution created such potential. The promise was to create strong local democratic governments and people’s councils tasked with development, welfare and social justice functions.

The later years created more such opportunities through Panchayats (Extension to Scheduled Areas) Act, Forest Rights Act, Pani Panchayats, school management committees, Village Health Sanitation & Nutrition Committees, and  so on. If we add the autonomous districts and regional councils to this list, the country has a plethora of such local democratic institutions where development, welfare and social justice could be embedded.

Unfortunately, a host of factors have ensured that these institutions are not able to deliver on their promise and potential. Rather than focus their energies and efforts on nurturing these institutions, political parties, the legislature, the bureaucracy and many international development agencies have steadfastly worked to weaken these institutions, disempower them and turn them into agencies of the state and central governments.

Devolution of power and authority to these institutions as expressed in 4Fs—functions, functionaries, finance and freedom—did not happen. Despite regular democratic elections to local bodies, establishing political authority of these institutions over the local bureaucracy has not happened in any significant measure. Further, several parastatal authorities have been created with various development mandates with no accountability to the democratically elected local bodies. India is probably the only major nation with no local government!

The result has been disastrous. The promise of development becoming a democratic enterprise has remained largely unfulfilled.  The practice of democracy remains confined to voting in state and central elections, the notion of development and welfare remains confined to politicians and babu controlled yojanas, and the notion of social justice remains a law and order enforcement matter.

The lack of institutions to support long-term change

Most of the development activities happen around the four axes of welfare, rights, development and crisis response. Typically, these range from raising the income of the poor, improving schooling, enhancing access to food-nutrition-healthcare and developing skills, to addressing trafficking, drought, floods, human rights violations, migration, violence against women, and so on.

Social movements, on the other hand, occupy the space in another way – raising collective voices against many kinds of injustices on people. We have seen several such movements and the tremendous results they have produced.

However, what is missing in many of these endeavours is the imagination of the institutional arrangements necessary to address these issues on a long-term basis. Let us take an example. Think of a situation where a significant part of the population is always on the move in search of work—a  national phenomenon now. How do we ensure basic civic entitlements, social security and human dignity for these migrants? What kinds of institutions at the municipal and district levels will be necessary to make this happen? Take another example. Violence against women is a wide-spread social problem in India and calls for a multi-pronged response. One question we need to ask is: What does a woman do if she faces violence? Some answers are available in the experiments of Nari-Adalats or family counselling centres, but a clear local level institutional mechanism is yet to evolve in the country.

The need for appropriate institutions is widespread: from educational institutions for first-generation learners, prevention and wellbeing-oriented healthcare, vocational education and  justice delivery, to restoring trafficked girls and boys to mainstream, livelihoods promotion, nurturing and enhancement, and the like. This must also include institutions designed along the lines of NID, NIFT, IIT and IIM for the unorganised sector, law schools to support citizenry, farmers’ colleges for sustainable agriculture, etc.

The failure to tackle social barriers

Certain institutions in each society act as crucial barriers to development, welfare and social justice. Caste and patriarchy are surely two among them in India. Our national leaders believed that reservations, modern education and modern employment would address the problem. That did not happen.

The development endeavour too has carefully avoided confronting these two barriers. Furthermore, development actions often have been built on patriarchal and caste thinking. Child immunisation became mothers’ responsibility, SHGs were formed on caste lines for reasons of homogeneity, caste politics was hailed as democratisation of the polity, states even ran yojanas to support dowry payment at the time of girl’s marriage, financing family expenses became women’s responsibility through microfinance…

It’s time state and non-state development actions took caste and patriarchy head on, with the readiness to address the violent backlash it will generate in the short term. The country has seen innumerable such backlashes against Dalits, Adivasis and women in the contexts of Panchayati Raj Institutions in almost every state. However, over time, such backlashes reduced even if they didn’t go away. Therefore, it is certainly doable.

The lack of quality education

India is the only country aspiring to be a world power, without substantial commitment to quality education at every level. Kids are in primary schools, but they learn almost nothing. While science recognises the criticality of early brain development, the model we have as ICDS is more to do with food for poor children than early childhood education.  Our colleges and universities are essentially degree delivery institutions. Our technical education institutions do not cater to large numbers of the workforce who are in the unorganised sector. We have no national chain of colleges for farmers. The country does not even have a reasonable quality teacher education model.

India’s claim on the demographic dividend is conceptually flawed, as no dividend is possible without a well-educated polity and workforce.

This does not mean the country does not have demonstrable examples of school and higher education of reasonably good quality. We do. Unfortunately, the country fails to learn what it takes to do that, and how to do it in scale.

There is no denying the fact that non-government organisations have shown demonstrable examples in addressing many social issues. Many of them have visionary leaders who have created models of development actions and inspired many others. Several progressive legislations as well as national missions in the last 30 years have been the result of such inspiring work.

A very large number of non-state development organisations, however, remain essentially local and peripheral to the development and social action space. They suffer from multiple organisational, financial and idea handicaps. Furthermore, they remain largely apolitical. Some of them even believe that development and a just society can be achieved without good politics!

Non-state development actions need to recognise that Sangharsh and Nirman have to work together for real development to happen. Sangharsh refers to mass civic and political actions demanding rights, entitlements and change. Nirman is about offering lasting solutions with new ideas, innovations, institutions and processes. From the experiences of Sangharsh and Nirman, it is amply clear that each of them requires distinctly different orientation, skill sets, attitudes and organisational characters. Therefore, instead of one organisation trying to do both, it is necessary to collaborate. Examples of such collaborations do exist but are still quite limited, and this must expand.

As we mark the 150th birth anniversary of Mahatma Gandhi, one meaningful way to celebrate him will be to confront the big picture without missing the details, as he always demonstrated throughout his life. 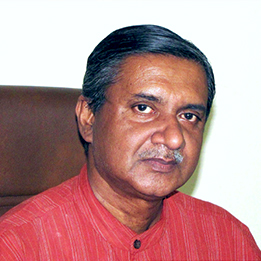 Prof. Ashok Kumar Sircar is Director, School of Development at Azim Premji University (APU). He has over 34 years of experience spanning corporate sector, development sector, and teaching and training. For more than 15 years, he has been involved in the development sector in programme planning and execution, monitoring and evaluation, research and policy advocacy in domains of local governance, land rights and livelihoods. At APU he is also involved in delivering popular courses on Gender in Livelihoods, Political Economy of Land, Understanding Development and Change, and Imagining Development, for post-graduate students, as well as in-service professionals.