Of Blind Dates, Fundraising, and Cha-Cha-Cha

Anu Prasad, Founder-CEO, ILSS, remembers the first time she tried to raise funds for her organization.

The meeting was set up by one of my mentors and well-wishers. He said the philanthropist was open to hearing about the work I do. My thoughts were running at a dizzying speed, with a healthy dose of both nervousness and excitement, as though meeting someone for a blind date.

There I was, in the lobby of his swank office.  I had to be on my best behaviour to convince and cajole (or at the very worst scare?) a potential funder into falling madly in love with my cause. He’d immediately write me a large cheque, and then get on the phone to invite all his rich friends to also support the stellar work we were doing.

Of course, it never goes like that. This was my first ever fundraising meeting. I had never met someone before with the sole purpose of asking for money, and especially not for my own organization. It was awkward and stilted, and I was more nervous than I would have imagined. Simply put, I just wasn’t sure how this conversation was supposed to go. After one is done extolling the virtues of the work, what does one do next?

Money, of course, was the proverbial elephant in the room. Should I be straight up and just ask for funding? If I don’t mention it, surely the philanthropist will wonder why we had the meeting in the first place. He may even think me a fool for not making the move! But if I ask, what should the number be? Asking too little could seem like an insult to him and his time. And asking too much could scare him away or sound entitled. Should I be asking at all in the first meeting?

My questions then evolved into the existential. What is it about asking for money that reduces a normally ebulliently confident go-getter like myself into a dithering preteen? Had I taken the time to articulate what I really wanted from this fateful first date? Isn’t fundraising supposed to be about building a relationship first? And how long does it even take to build purposeful partnerships? What would be most critical to my organization’s success at this stage- did I need his trust and support more, or was his money more essential?

I came away from that meeting with no money, but a kind offer to consider my cause the following year. To be honest, though, it may be a while before I feel prepared to go back to him, mostly because the memory of my stuttering self is so humiliating that I can’t bear to meet again the only other person who witnessed it.

My biggest learning a year and a half later?

Fundraising begins in your head. It isn’t simply about the great work you are doing, but also your ability to put yourself out there, take rejection on your chin, and learn over time to ‘win friends and influence people’. Dale Carnegie was clearly on to something when he wrote that book. It is equally about your ability to do the research, figure out where you stand, how you can pitch for the context, and – perhaps most of all – build the right partnerships with the right funders who will walk the path with you and champion your work beyond just dipping into their wallets.

Looking back, I realise that fundraising – and the inevitable donor relationship- is a dance that one has to choreograph. Two steps forward, three steps back, cha cha cha. It may take a while to find a rhythm and to fall into step together, but once you’ve synchronised your intent and resources towards a common vision, it can be magic all the way. 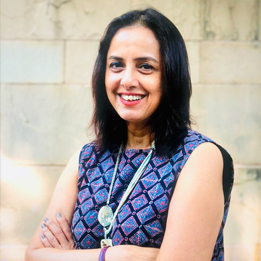 Anu Prasad is the Founder-CEO of India Leaders for Social Sector. Prior to setting up ILSS in 2017, Anu was the founding Deputy Dean of the prestigious Young India Fellowship (YIF) and a founding member of Ashoka University, India’s first liberal arts university. Before joining the social sector, Anu held leadership roles at multinational companies such as American Express and TNT. At AmEx, she led the implementation of their global financial re-engineering as a part of launching AmEx Financial Resource Centre in India. At TNT she was head of finance for the company's North India region. An entrepreneur at heart, Anu has also co-founded and managed a successful travel company. She has also been a consultant for Dell Foundation on education projects. Anu is an avid reader, an active volunteer in civic causes, and a passionate believer in lifelong learning, all of which she incorporates into the ILSS proposition of learning and values-based leadership. Anu also mentors young professionals and senior leaders and sits on the Board of two non profit organisations. Anu graduated from HR College, Mumbai, and received her MBA from IMI, New Delhi.