Let’s give children a voice in education

Twenty-seven years ago, Shaheen Mistri set up Akanksha Foundation as a response to the deep inequity she saw in the low-income communities of Mumbai. She believed then—as she does even more strongly now–that quality education has the power to impact the lives of children and communities.

In 2009, she founded Teach for India (TFI) to address inequity in education at scale, so that every child in the country would have access to a good education. TFI set out to do this by focusing on building a leadership pipeline for the education sector and on creating collective commitment.

Ten years on, TFI has created a successful and transformative fellowship model, an alumni network of 2500 young people deeply committed to the cause of education, and a large number of student leaders who want to reimagine education. TFI today touches the lives of close to 150,000 children through the fellowship and its alumni, and plans to take that to a million children by 2022.

Here, Shaheen writes about the journey she embarked on as an 18-year-old, the lessons learnt along the way and what keeps her going.

When I was eighteen, I dropped out of Tufts University to follow an instinct to do something different. That decision brought me to Mumbai, where I joined Xavier’s College and soon started exploring the city, following a Times of India reporter around to get access into spaces that I wouldn’t otherwise get a chance to see.

The exploration took me to communities where I saw inequity, injustice and the many complex challenges that arise out of living in poverty. One day, I walked into a large slum community in south Mumbai and decided to start working with the children there. Fortuitously I met a girl, Sandhya, who was my age and had lived a life that was about as different from mine as one can imagine. But we shared a deep connection and she opened her home to me.  That became a makeshift classroom where I started teaching some kids.  That’s how Akanksha started.

The more I saw the needs of the communities I visited, the more I was overwhelmed by the range of needs. To me education seemed like the piece that impacted the maximum number of needs. If you can give people the opportunity to develop their own potential, they are able to use that to solve other issues.

I had also discovered early on that my own passion and energy came from working with kids. Till today my biggest joy comes from taking a class with children and seeing their curious faces, excited about learning.

Having studied in 10 different schools and gained an exposure to different pedagogy, I believed that academics and rote learning were just not the things that kids needed in order to excel. So, right from the beginning, we did a lot of experimentation at Akanksha with the arts, holistic education, and the integration of values and character development into education, and so on.

Akanksha helped me understand who I was and who I wasn’t. The self-awareness that I gained in my 17 years with Akanksha gave me the confidence to know that this was the kind of work that I wanted to pursue for the rest of my life.

The biggest thing Akanksha did was to show me the impact education can have on kids. When you see the power of education yourself, there’s no alternative but to try and work with more kids.

After 17 years at Akanksha, during which we saw dramatic progress in the 4000 kids we worked with, I started asking myself what it would take to change the system for more kids—and Teach For India (TFI) seemed like a faster way to drive systemic change because it was fundamentally about leadership. I had experienced the dearth of leadership during the Akanksha days, when we couldn’t implement several good ideas because we didn’t have the people to do it. The best people simply weren’t coming into the education sector.

TFI started as an experiment to create a platform to bring good people—who would not otherwise have been in education—into the sector, in significant numbers, and to develop leadership in the short term and the long term. We do two things primarily:

When we recruit fellows for TFI, we look for people who believe that teaching can change the nation, who want to be a part of something larger, who have idealism.  Once they come in, we orient them to be mission-driven: we talk to them about building the country, bringing about systemic change, understanding what inequity feels like and what it does to lives. We believe in collective action because even if we excel individually, we are only going to have a shot at moving the needle if we work together. That’s how TFI has become a movement.

We have 1100 fellows right now, teaching across seven cities. Then we have TFIx, a parallel program to support entrepreneurs in rural India working with much more vulnerable children.  Together, with the TFI fellows, 2500 alumni and the TFIx fellowships, we will be able to multiply the idea of a talent pipeline for the sector. Over the next five years, we aim to double the number of fellows so that we will have around 6000 fellows and alumni in the system.  We are hoping to retain 70-75 percent fellows in the education sector after they finish the fellowship. We are looking at ways to encourage our alumni and school leadership to work together, achieve collective impact.

When we look at education in our country, we will see how we have failed our children at every level. I strongly believe that the success of any effort finally depends on the people in the system. Why are people not aspiring to be teachers? How do we bring our best people into teaching? How do we ensure that we have good talent across all levels in the system? How do we revamp teacher education, the way we think about teachers and how we value them?

Another important dimension is what we teach our kids, looking not just at curriculum, but how that is being delivered in classrooms, how we are building 21st century skills into our practices.

The bureaucracy and the lack of voice across the entire system is another area to be addressed. We are not empowering people at all levels to drive change. There is a lot of untapped potential within the system, in our teachers, in our schools, but everybody is doing what the person above them is asking them to do.  We haven’t built a culture where people are excited and feel the importance of the work that they do.

We need to think about relationships in the system. The student fears the teacher, the teacher fears the head master, who in turn is nervous about the education officer.  How do we break down fear in the system and blur the boundaries between people?

We also need to rethink what we are testing for; unless we re-examine the focus on exams and theory, we are not going to change what happens in schools. We must think about holistic assessment and reduce the rote way of cracking exams, lessen competition a bit, value kids for who they are, as unique individuals.

Reimagining the role of kids in education

I can’t think of any successful social movement where the people who are most affected by the movement are not driving it. But education is a different story altogether. When we talk about changing the education system, “we” are essentially adults. Historically, adults have decided everything to do with education—from framing policy to designing textbooks to teaching in classrooms. A child’s voice has been completely absent.

We need to stop seeing students as this mass of 300-odd million kids that need to be educated; let’s think of them as partners in driving their own learning and that of other children. Imagine a classroom where, instead of the teacher being the central figure talking to 30 children, we create space for peer-to-peer learning, where every kid is building on their strength to be both a learner and a teacher! Instead of a teacher assuming full responsibility for 30 kids, there are 31 learners who have responsibility for each other.

If you go up the levels of the system to the policy level, it would mean having kids at the table when drawing up our policies and asking them why they need to be educated, what kind of an education is relevant for them, and how can they best learn?

Essentially, this kind of community leadership is about a shift in power: we have to let go of control. But it’s tough because we are conditioned to take control.

If you look at the scale of the problem in our country, it’s simply not going to be enough if only adults—teachers, policymakers, school leaders­— are involved in changing things. And kids have a natural curiosity and willingness to do things, so why aren’t we leveraging that resource? Personally, even after 27 years in this work, I still stay connected to kids – I still go into classrooms to teach, spend time in the communities. I draw a lot of inspiration from meeting my alumni who are doing incredible work and are committed to change for kids. All this keeps me going. 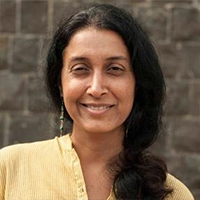 Shaheen is the founder and CEO of Teach For India. Prior to this role, she founded and led the Akanksha Foundation for 17 years, where she worked to provide a quality education to children from low-income communities. In 2008, Shaheen founded Teach For India, with the vision of providing an excellent education to all children across India by building a pipeline of leaders committed to ending educational inequity in the country. Shaheen is an Ashoka Fellow, a Global Leader for Tomorrow at the World Economic Forum, and an Asia Society 21 Leader. She is the author of Redrawing India. Shaheen serves on the boards of Simple Education Foundation (SEF), The Akanksha Foundation, Teach To Lead, Indian School Leadership Institute, Design for Change and Symbiosis School Central Directorate. She is also a Governing Council Member on the Maharashtra International Education Board (MIEB).