A better world begins with me

Meghna Verma, ILSS alumna and head of operations at JCB Literature Foundation, says her decision to transition to the social sector was driven by a deep sense of responsibility towards creating a more inclusive world.

“Begin with setting your non-negotiables and then remember that everything else is flexible.”

This sentence is the first thing that comes to mind whenever I am asked about my foray into the social sector and my experiences since.

My transition into the social sector was a well thought out decision which had absolutely nothing to do with ‘giving back to society’. Living in Paris as the CMO of a tech company, I was living the dream in my mid-30s. But, at the back of my mind, I was very conscious of the fact that sooner rather than later I needed to make the shift. The reason for this has always been a very selfish one: I want to live in a better, more accepting society and if I am not willing to work for such a society then I do not have the right to demand such a society.

Having volunteered in various non-profits and social enterprises since my teens, my key takeaway from the experience was that there was a skills gap within the sector and volunteers weren’t the solution: the social sector needed the same skills as the private sector. Then, India did what no other country had done before: we made CSR spending mandatory. I saw that as the sign I had been waiting for.

In 2016, I handed in my resignation and moved bag, baggage and dog to India with absolutely no plan. All I knew was that I had marketing skills to offer and some non-profit out there could use them. As it turned out, some non-profit did use them!

The chaos and the passion I encountered gave me the adrenaline rush I craved. I had a team comprising young, enthusiastic millennials who wanted to learn and highly experienced people from the social sector who had a lot to teach me. I put my fingers into every pie and soaked it all up – audits, finance, law, operations…the list was endless.

While my first year in the social sector was hugely satisfying from a professional point of view, it taught me a lot of things the hard way. The hardest fight I fought was against the perception of a social worker or the ‘NGO type’. Every time I walked into a corporate they found it hard to believe that I worked for an NGO because I wasn’t what they expected to encounter. On the other hand, every time I walked into an NGO, they couldn’t believe that I was ‘one of them’. This belief that corporates and NGOs are from entirely different universes was something I found hard to understand.

When ILSS announced the launch of the ILSS Leadership Program towards the end of 2017, I was intrigued. More than anything else, I wanted to meet others like me – people who believed that the social sector was not some fourth dimension. ILSS gave me two very important things – friends I could turn to because they understood where I was in my journey, and my non-negotiables!

The quote I started this article with was uttered by Eshwara Venkatesam during his session on fundraising. As someone who had been fundraising for about a year by then, this quote stuck to me in a strange way. While at ILSS, I took this quote in the context it was uttered – fundraising. It made sense.

On finishing ILSS, I moved to a bigger NGO because I felt that I could do more there as opposed to a niche NGO where I had already made myself redundant. It was here that I truly understood the meaning of Venkatesam’s words. Four months into my job, when I came face-to-face with my non-negotiables, I decided to move on.

It was then that an opportunity came my way. JCB India had launched a CSR initiative called JCB Literature Foundation, which runs the JCB Prize for Literature, focused on Indian literature. They were looking for someone to head the foundation and with my mixed bag of marketing, brand management, finance, operations, and non-profit related legal exposure, I fit the bill. I took a chance. Five months on, I couldn’t be happier.

From the moment I started my journey back in 2016, every decision I took was taken with one goal in mind – how will I contribute towards creating a society worth living in? Not every decision I took worked in my favour, but each of them taught me something. Looking back, I would do it all over again and I can only hope that what is to come will be even more exciting. 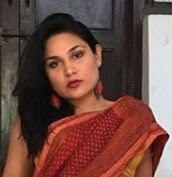 Digital strategy & marketing professional by day and an artist by night, Meghna has a passion for building brands. She transitioned to the social sector over two years ago with the vision of changing the landscape of non-profit marketing and CSR through digital. Meghna is an ILSS alumna from the January 2018 batch.